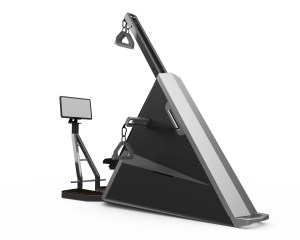 In short, the ARX has a computerized machine that meters out resistance in a couple of different ways. This one (above) does a chest press, an overhead press, etc. The other one does leg press, horizontal row, and some others.  PaleoPathologist did leg press, lat pulldown, chest press, and row. The computer screen on the left shows you exactly how much effort it is feeding you, and it will show you last week’s workout in parallel so you can immediately see how you are progressing.

It is fascinating. The machine puts the right amount of pressure on to give you a perfect negative AND positive rep. Negative (eccentric)  reps are when you are holding the weight against resistance and gradually “losing” while the positive (concentric) rep is when you are actually making headway against the resistance. If you were doing bicep curls, the positive would be when you are raising the weight while the negative would be letting it down.  Muscles can hold much more weight than they can lift, so this machine works the muscle to its maximum in both phases. Bodybuilders have known for years that the negative, or eccentric, phase is very important. No weight machine can do this unless you have a trainer help you up, then let you lower the weight.

The Paleo legs actually resisted over 900 lbs for several seconds on the way to total muscle meltdown. My nautilus machine max last week was 330 lbs. The other exercises were equally incredible. Interestingly, even though the chest press was quite intense (especially on negative) I felt very little soreness in the right shoulder I injured doing the stupid Steinborn lift before I found HIT.

The workout took about 20 minutes, about three hours ago, and I’m going to need some recovery time! But I see zero risk of having injuries.

I’ve been doing the Nautilus HIT for over a year now and felt pretty good about my progress. I was starting to plateau, though. This machine feels like a whole new level. I’m pretty excited.

Here is a video of my trainer doing his first ARX leg press.

So, how does this sound to you? Horrid or fabulous or both?

Comment0 | Share | Tweet | print | email
Category: fitness
Disclosure of Material Connection: Some of the links in the post above are “affiliate links.” This means if you click on the link and purchase the item, I will receive an affiliate commission. Regardless, I only recommend products or services I use personally and believe will add value to my readers. I am disclosing this in accordance with the Federal Trade Commission’s 16 CFR, Part 255: “Guides Concerning the Use of Endorsements and Testimonials in Advertising.”