Man, PaleoPathologist, remember when your pa told you, “If it sounds too good to be true it probably is?”  Five minutes a night? Give me a break. And writing down three or five things I’m grateful for? How uncool, how hokey, how corny…but believe it or not how effective! 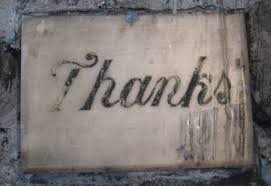 Major religious and philosophical traditions have emphasized gratitude for millenia.

Enter His gates with thanksgiving and his courts with praise; give thanks to Him and praise His name. Psalm 100, 1000 BC, Hebrew bible.

Enough is a feast!  Buddhist proverb.

He is a wise man who does not grieve for the things he has not, but rejoices for those he has.  Epictetus, Greek philosopher, 100 AD.

Gratitude is not only the greatest of virtues, but the parent of all others. Cicero, 100 BC.

Dr. Martin E. P. Seligman wrote a groundbreaking book called “Authentic Happiness” in 2002. In the chapter on your attitude to the past, he writes about cultivating gratitude as a method for actually increasing your happiness and satisfaction.  He cites studies similar to this link, which says that various psychological studies have shown cultivating a gratitude practice can improve perceived happiness, sleep, exercise, heart disease, outcomes from several neurologic diseases, other illness symptoms, and have a better chance for an optimistic view of life. Happier Human lists a multitude of ways that a simple five minute a day gratitude practice improves your life. He even speculates on how it might lengthen our lives, which really gets PaleoPathologist’s attention.

Hey, PaleoPathologist, the world is really harsh out there–murder, disease, natural disasters, competition, war. Isn’t it dishonest to force myself to think of things to be grateful for in this world, even if it makes me feel a little better?

But, focusing ONLY on the negatives is just as dishonest as engaging in noting only the positive!  PaleoPathologist can enter any King Soopers grocery store and see laid out before him a bounty that would have astonished King Solomon, the richest ruler in the ancient world. The PaleoPathologist Cave has air conditioning and heat, electricity to power this fancy electronic stone tablet, and a magic chariot that doesn’t even require a dinosaur to pull it. There is a lot to be grateful for. True honesty consists of awareness of everything going on, not simply focusing on the negatives OR the positives. It just takes more effort to expand your consciousness into the positive.

What do I do?  In short, get out YOUR stone tablet and write down 3 things that went well today, each day. There are some technological helps out there.  The Duke University Patient Safety Center has data that a short term gratitude intervention makes caregivers more resilient, and therefore better at taking care of our sick tribemates.  Take a look at the video on their site. (If it can make Duke Internal Medicine residents, one of the most beaten-down groups in the country, more resilient it can help anyone.)

PaleoPathologist has been using Grateful160 for a while now. It sends an email daily reminding him to say thanks, and keeps it all on their servers.  Berkeley has a center for expanding gratitude as well with their own sign-up site. There is so much research in the past fifteen years that only a real grinch could deny it.

So what holds you back? Have you tried a formal gratitude practice to improve your health and happiness? Let’s talk!

Comment1 | Share | Tweet | print | email
Categories: life, well-being
Disclosure of Material Connection: Some of the links in the post above are “affiliate links.” This means if you click on the link and purchase the item, I will receive an affiliate commission. Regardless, I only recommend products or services I use personally and believe will add value to my readers. I am disclosing this in accordance with the Federal Trade Commission’s 16 CFR, Part 255: “Guides Concerning the Use of Endorsements and Testimonials in Advertising.”